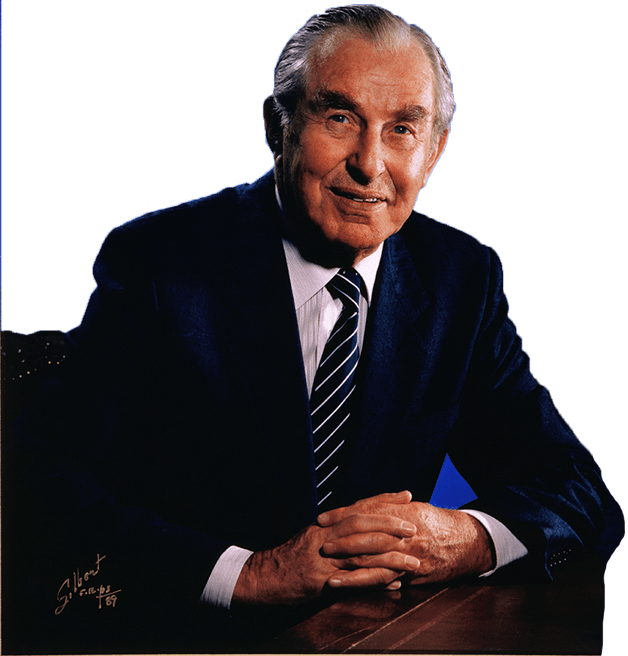 The story of his life

Chaim Herzog was born in Belfast in 1918, to Rabannit Sarah and Rabbi Isaac Halevy Herzog, later chief Rabbi of Ireland and Israel.

Herzog served as a combat intelligence officer in the British army during World War II. He took part in the invasion to conquered Europe, the release of Bergen Belsen camp and the capture of SS commander Heinrich Himmler.
In the Israeli army he served as military attaché to the US and as head of Intelligence. Herzog became well known in his encouraging commentaries to the Israeli public during the six days war in 1967, and later was nominated as the first Israeli governor of East Jerusalem and the West Bank.
In 1975 Herzog was appointed as Israel's ambassador to the United Nations. His comment speech to the UN resolution 3379 comparing Zionism to Racism is regarded as a Historic speech, which is famous for the tearing of the resolution by Herzog.
Herzog served as President of Israel for a decade, between 1983-1993. As president, He devoted his best efforts for supporting national unity, respect for minorities and for promoting Israel's position among the nations
Read more Watch the movie

Address by Chaim Herzog, Israel's ambassador to the United Nations, delivered at the UN General Assembly on November 10, 1975, in which he rebuked the General Assembly infamous Resolution 3379 equating Zionism with racism. At the end of his speech Herzog tore the resolution's paper.
This speech was chosen by a group of historians headed by the renowned British historian Simon Sebag Montefiore, to be part of 50 historical "Speeches that Changed the World"(Quercus Publishing, London, 2005, 2007, 2013). Here is a link to an interview with Simon Sebag Montefiore where he explains why Chaim Herzog's speech was chosen for the compilation of the great speeches.
The interview Watch

Chaim Herzog's broadcasts to the nation towards and during the Six-Day War (may 28 - June 9, 1967)
View all Watch

The central project in commemoration of President Chaim Herzog is the Chaim Herzog Museum of the Jewish Soldier in World War II. It is being built in Latrun, a site of historic significance between Tel Aviv and Jerusalem. This Museum is designed to tell the unique story of Jewish heroism and the contrbution of some 1.5 million Jews from across the globe to the defeat of the Nazi regime. The Museum will also commemorate the 250,000 Jewish soldiers who gave their lives during the War. Chaim Herzog fought the Nazis as an officer in the British army in WWII, and in 1948 he fought in Latrun during Israel's War of Independence, as an officer in the IDF. The Museum is a joint venture between the Yad Chaim Herzog Memorial Foundation, the Association for Establishing the Museum of the Jewish Soldier in World War II, and the government of Israel. The attached brochure provides some basic details about the project.

The Book Way of Life

Autobiography of Chaim Herzog that was published in 1996. In his special way, Chaim Herzog describes his way from growing up as a Jewish boy in Ireland to his term as the President of Israel.
The book gives a unique testimony to amazing times, including WWII, the establishment of the State of Israel and the battle for Israel's international status